Mr. Fink, who has represented businesses, municipalities, doctors and lawyers in complicated litigation, has been recognized as a “SuperLawyer” each year since 2007.  In 2011, Mr. Fink was named a Leader in the Law by Michigan Lawyers Weekly.

Darryl Bressack graduated from University of Michigan law school and is also an Oakland County Business Trial Lawyer.  Mr. Bressack has been honored as a Rising Star by Michigan Super Lawyers Magazine, as an Up and Coming Attorney by Michigan Lawyers Weekly, and as one of Michigan’s 40 Under 40 by the National Trial Lawyers Association.

Fink + Associates Law represents clients from many states and partners with out-of-state law firms seeking to refer litigation matters.  We also work with out-of-state firms as local counsel and in various co-counsel capacities. 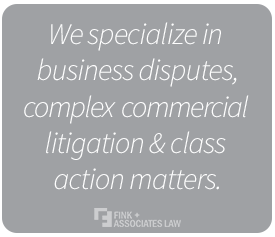